After visiting a family friend’s home in Duton Hill near Gt Dunmow, a home built on ancient ground going back to the 16th century; Marina and Victoria were inspired by the remote, sweeping backdrops and the beautiful pond within the estate. They loved the idea of Shakespeare’s tragic heroine Ophelia and were in love with the image of ‘Ophelia in the water’, the tapestry of muted colours reflecting the Elizabethan time period. They had a huge challenge on how they were going to capture the images above the water looking down, and of course they had to float their model on a pond! Marina’s partner Richard was brought on board to construct a pulley to lift the photographer into the air and also he made a floating board on which we could lay our model and cover her with foliage. 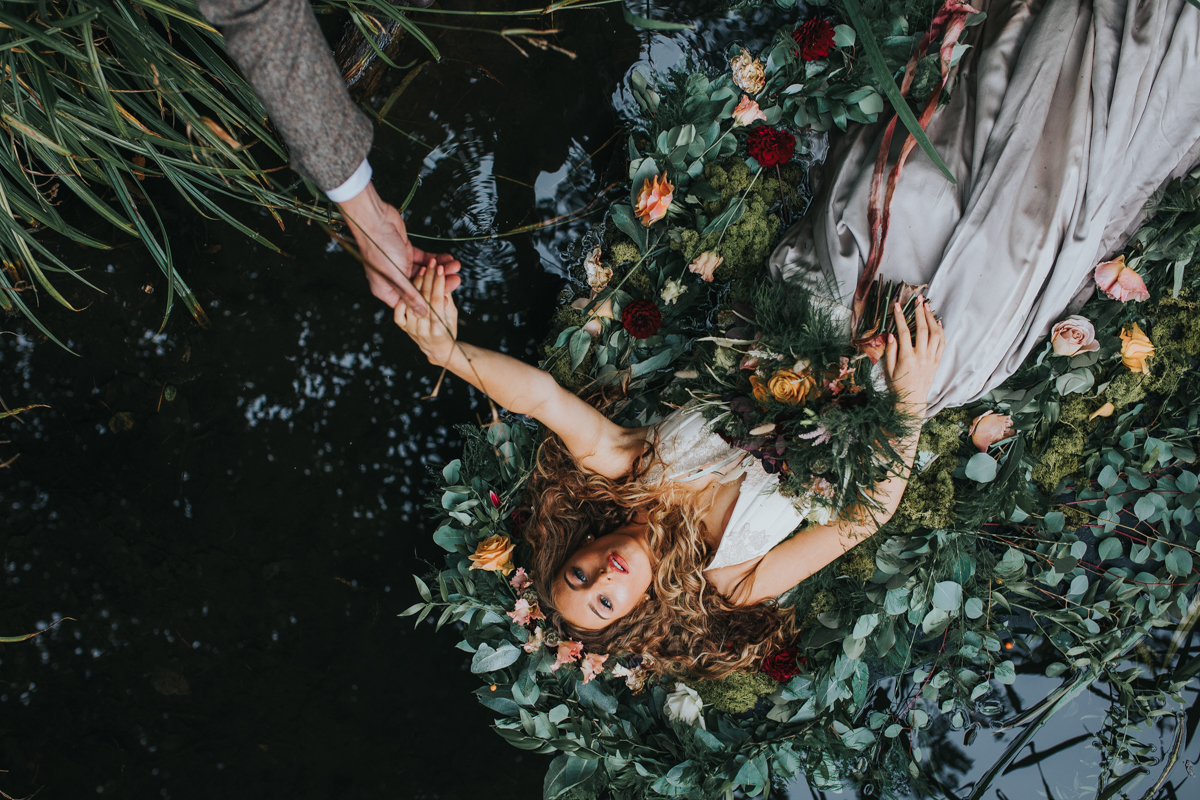 What was the inspiration behind the shoot?

The wedding inspiration was heavily inspired by Shakespearean Heroine Ophelia, the colours were inspired by the painting of the lady in the boat by Shallot and Ophelia in the Water.

We wanted to incorporate rustic, medieval colours, like those from a tapestry with an ethereal feel and this was  woven into the hair design, the flowers and the cake. We shot in a very old home, with a sunken Victorian greenhouse and a lake so we could really use all these tones and colours.

Although this was inspired by a time period, we also wanted to create inspiration for modern brides, ideas they could pull for their wedding that would look seasonal and beautiful. 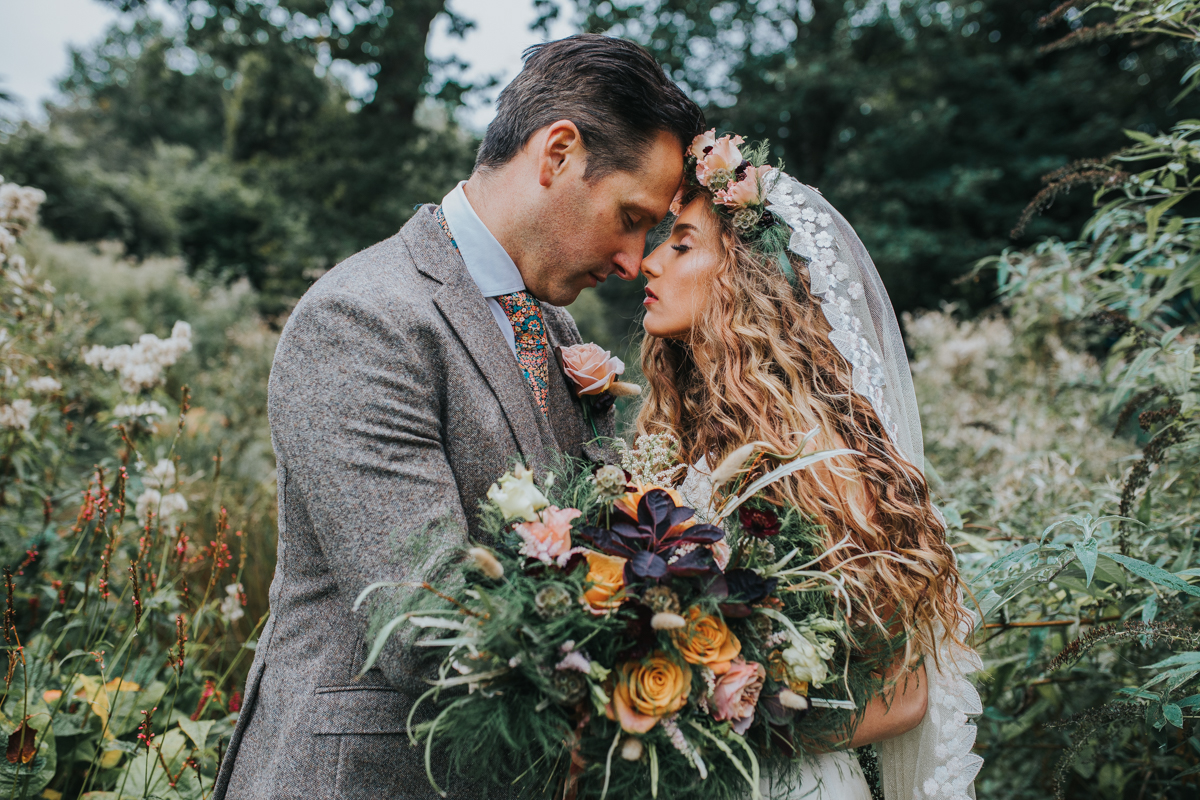 The Venue and Florals

The venue was a private garden and we chose it for its beautiful gardens and features which fit perfectly for the wedding inspiration look we were going for. 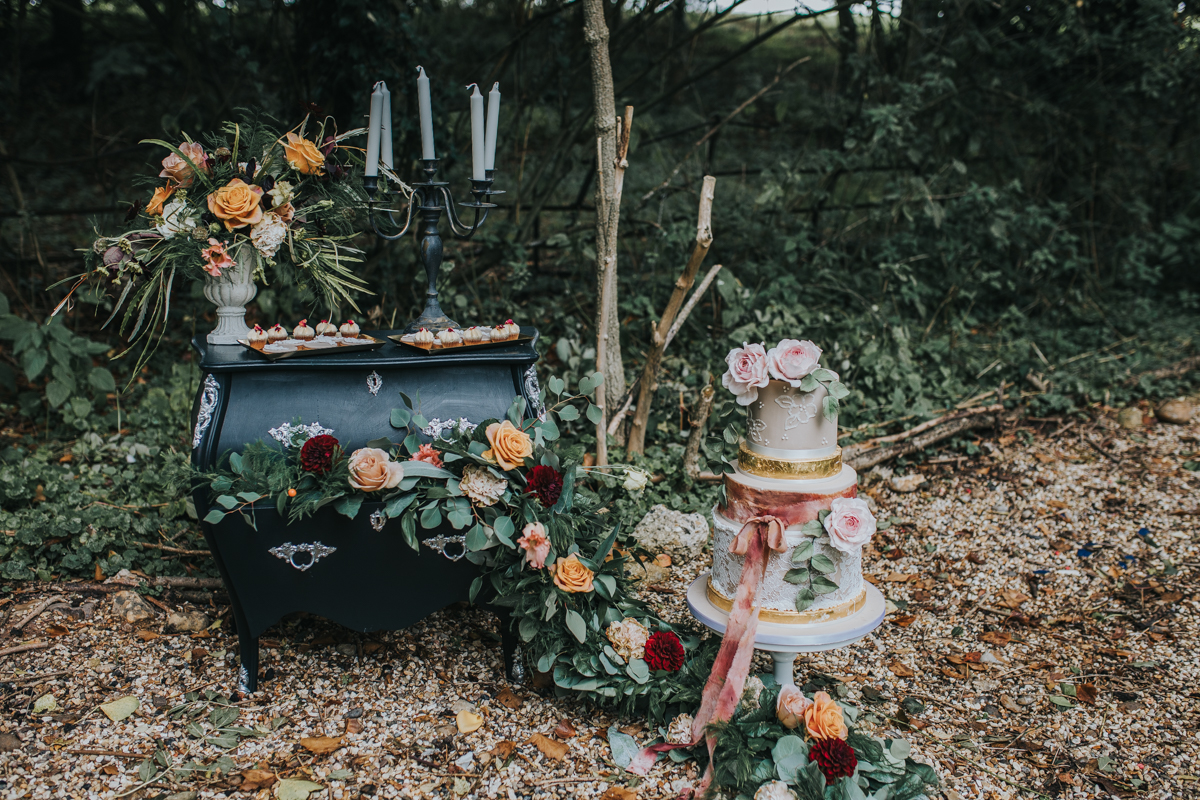 Hair and Make Up

Marina on hair: Ophelia was a true beauty of her time as is our beautiful model Ella Palmer, with her waist length, thick hair I set about creating spiral curls that represent the spiralling madness and wild uncertainty of this tragic character Ophelia . 2 sets of hair extensions were used in contrasting colours to achieve the wild abandonment look of our Ophelia.

I set small sections of hair on a 10 mm wand and pulled the coiled springs out with my fingers I was able to pre curl the hair extensions and place in the hair as I curled each section , achieving a full modern luxury boho style .

Victoria on Make up: I wanted to create something visually stunning on camera, which would reflect the tapestry colour palette we had chosen. For Ella’s skin I used a highlighter to prime and also give a dewy glow, so that her skin would reflect the light, I could then buff over a light base so it blended seamlessly, with a gentle contour. On her eyes I used a soft pastel pink and ochre in the crease to add

depth. Ella’s lashes were already done so this added a bit of drama. Her lips were a soft berry colour to tie in with the russet colours we had in the bouquet. It’s an editorial look but can easily be adapted to a bridal makeup. I love being able to provide makeup inspiration to brides to be, it’s still a classic look that won’t date. 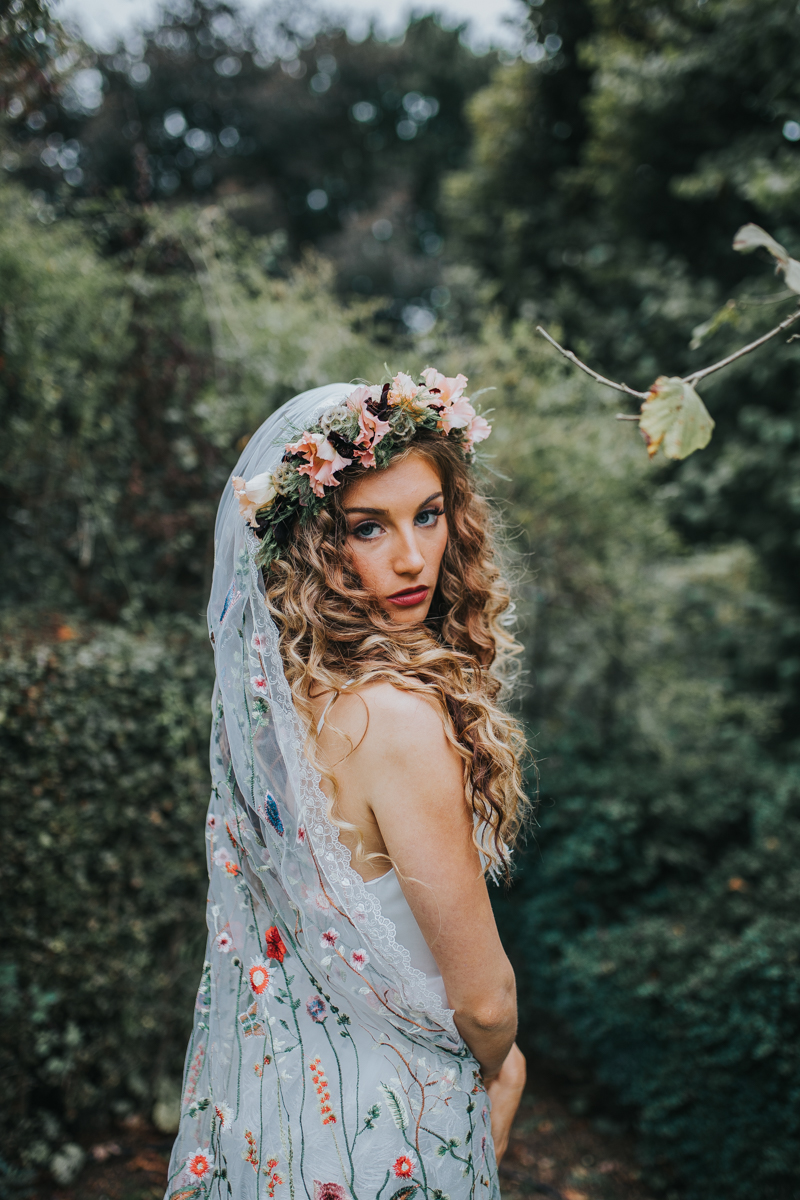 What the suppliers added to the shoot

We chose tapestry colours and tones of the painting we were inspired by and used these to guide us in dressing our model’s Ella & Duncan. Duncan wore a tweed suit from Hardy’s of Halstead with a floral Ted Baker neck tie. The Ella wore a combination of two gowns by After Elizabeth, a couture dress designer. One was a white gown with feather embroidery and the other was a corseted two piece, the bottom half was a grey silk, which we picked because it was very likely it would get wet; As Ella was going to be floating on a bed!

Rebecca created a beautiful rust and gold tiered cake which used a velvet ribbon to tie all the colours together.

As well as the bouquet and feature florals, Charmaine provided a flower crown to bring the florals together flawlessly and we chose some timeless veils supplied by Sash & Veil with beautiful details to finish off Ella’s look inspired by different representations of Ophelia’s character.

Laura on Photography: The imagery that we put together and captured for this shoot was highly inspired by a narrative which i something that i love to portray in my images coming from a fine art photography background. I tried to create scenes with Ella & Duncan that were more that just portraits. For example Duncan leading Ella over the bridge and Ella as ophelia on the water. I made use of the natural soft diffused light to highlight the beautiful tones in all of the aspects in the shoot from the florals, cake, veils, make up and outfits. The team worked really closely together to make sure that everything tied in effortlessly and i really wanted to show this when creating the images. 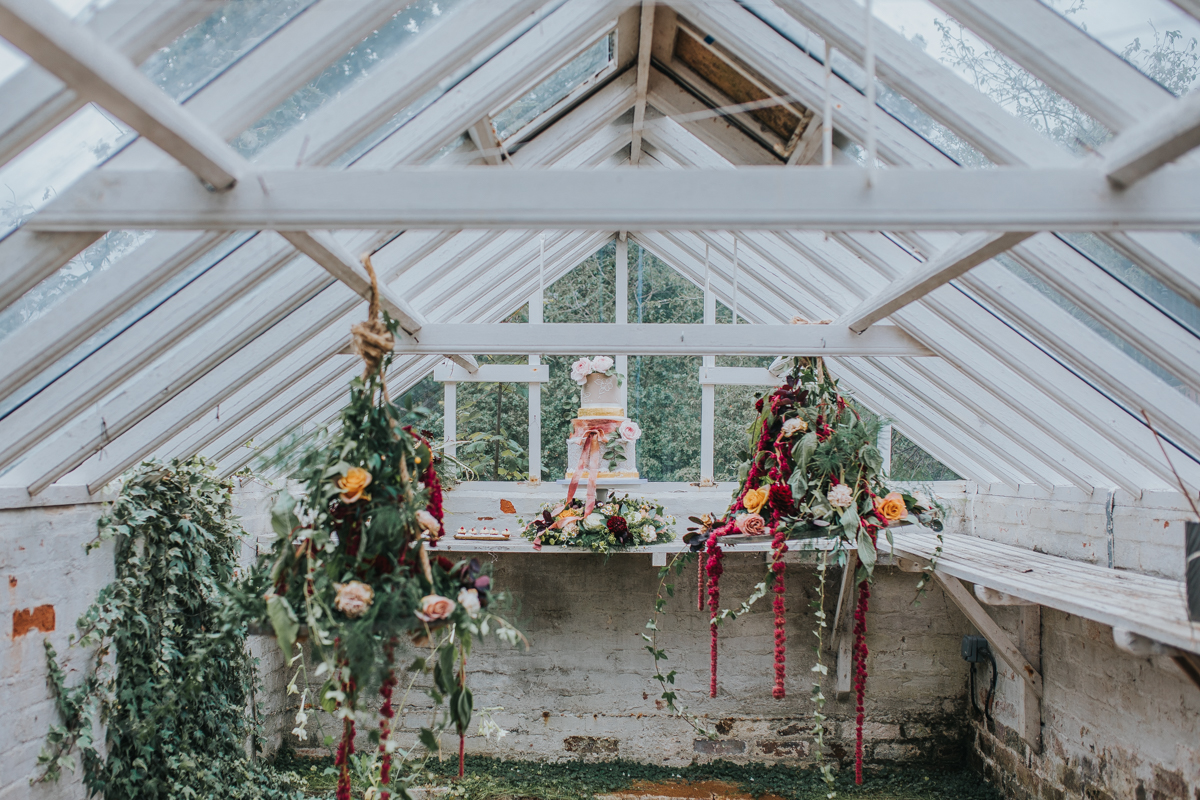 The result was amazing and we can’t thank our amazing team enough. This combined with such attention to detail with the dresses, flower crowns and stunning veils, we feel so blessed to have brought this wedding inspiration together. 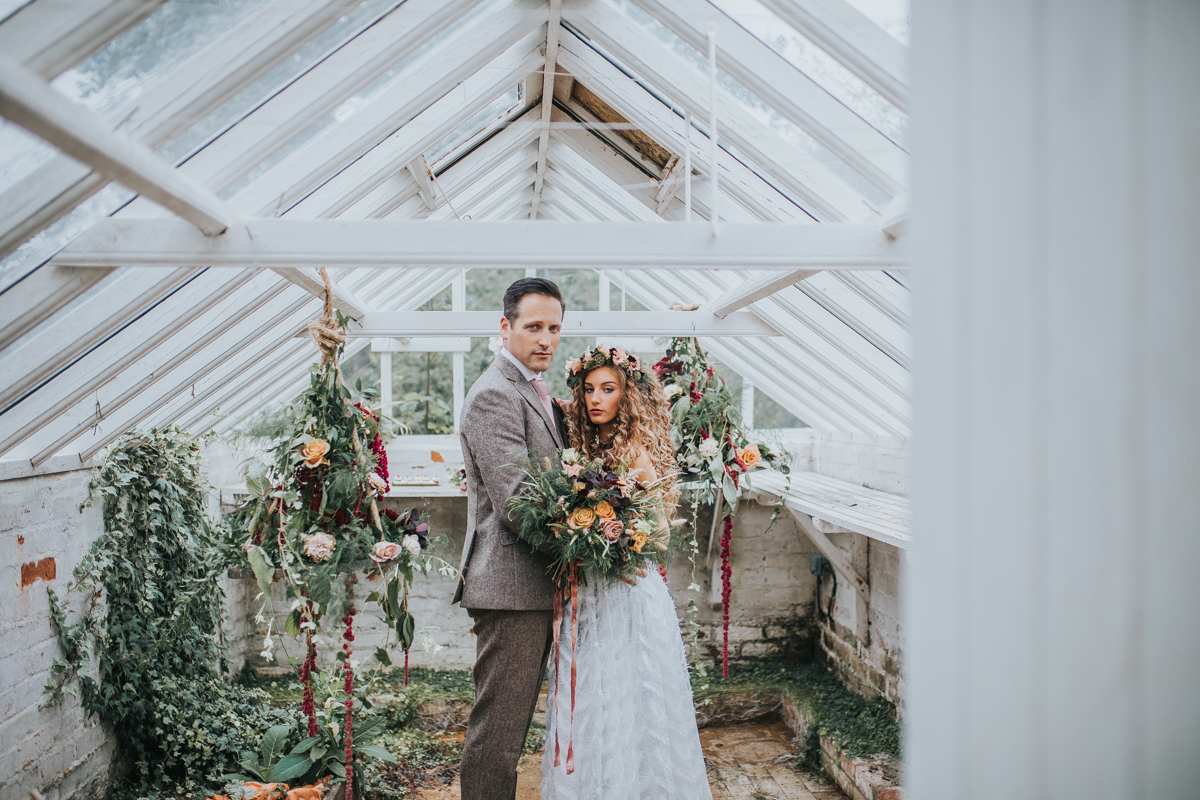